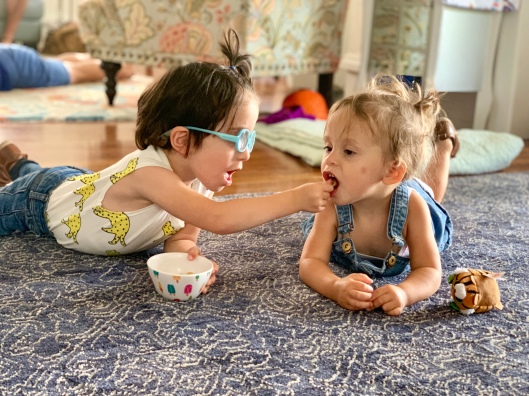 Isla is 3.5 and will be starting school in September (different from her nursery school). If I could, I’d send her to a little outdoor “school” with just a handful of friends, as she thrives most doing her own thing in peaceful, not-too-structured environments. But since that’s not an option, I’m hoping she’ll get on well at her new school. As is, she’s excited about it and knows that once August is over with, it’ll be time. She loves to sing and has a very sweet voice. She likes to improvise with her own lyrics, and loves music. She really feels it. She’s still meandering around between 3 languages, mostly sticking to English and Arabic with some French words thrown in. Oddly, she likes watching kids’ songs on youtube in Italian and Spanish. Maybe she’s most comfortable when she doesn’t fully understand what’s going on?? I’ve never met anyone quite like her.

Gaia (1.5) has joined her sister at the nursery school, and loves it there. She likes all the stimulation and songs and activities. She’s a very quick learner, and likes to boss people around. She makes me laugh all the time. She’s much more verbal than Isla was at this age–probably because she needs to express everything that’s on her mind, whereas Isla keeps her inner world a mystery. I don’t know how we have such opposite girls! They don’t get along too well yet, so when they play together or make each other laugh it makes me want to throw a celebration.

They’re both at fun ages. Here are some funny things they’ve been saying (which just show how different they are).

-“Mama I don’t like sunny days. Wein el shitté, wein?” (Where’s the rain, where? -It doesn’t rain during the summer in Lebanon). “Gaia likes sun. I don’t like sun. Gaia, baddik sunny days?” (Gaia, do you want sunny days? As in, take them all for yourself, I don’t want them.)

-She loves quietly conversing with the neighborhood cats. They’re not afraid of her because she gives them time to warm up to her. Then she tells them everything on her mind, but I can rarely hear what she’s saying to them because her voice is only slightly higher than a whisper.

-The cats were mewing outside the door. She knows they’re not allowed to come inside. I asked her if they might be hungry and if we should feed them. Isla responded very firmly, “No Mama, they want a maison.” (They want a house.)

-Isla loves getting in some time to play by herself, so sometimes I’ll take Gaia up to visit her grandparents (on the 3rd floor of our building) while Isla “takes care of the maison” and does her own thing.

-Whenever a commercial comes on if they’re watching a youtube video: “Oh! What happened?”

-If she sees the slightest mark/hole/scratch on anything or if it won’t function: “Oh no! Broken!” (said in complete panic)

-When I tell her it’s bedtime: “No Gaia bedtime. Isla bedtime.”

-When we start playing the song Under Pressure by Queen: “No Unda Pressa!!!!!!! Mamma Mia!!!!!” (She really loves Mamma Mia by Abba and always requests it. She also loves to sing, although her voice is a little more aggressive than her sister’s. She is good at memorizing lyrics!)

1 thought on “Isla and Gaia Isms”